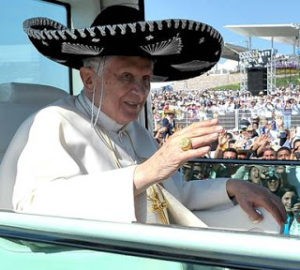 In this picture made available by the Vatican newpaper Osservatore Romano, Pope Benedict XVI arrives in the papamobile, wearing a traditional Mexican ‘Charro’ hat, to an open-air Mass at the Bicentenary Park in Silao, Guanajuato, Mexico, 25 March 2012. Pope Benedict XVI on Sunday flew over a giant statue of Christ with arms outstretched, near the central Mexican city of Silao, prior to saying mass before a crowd of thousands. Benedict who is to say mass at the Bicentennial Park, at the foot of the Cerro del Cubilete, flew over the statue at the top of the hill in a helicopter of the Mexican Armed Forces. ANSA/OSSERVATORE ROMANO +++EDITORIAL USE ONLY+++